Located in Northen Kenya in the Laikipia Region, the Loisaba conservancy is a 56,000 acre wildlife conservancy and working ranch. The conservancy has more than 260 species of birds and 50 species of mammals and homes a very endangered species of Zebra known as Grevy’s zebra.

It was hot, dry and in desperate need of some rain when I was there a few weeks ago. The rains have come, I am now told.

The conservancy has a new aerial unit which is where my brother comes in. He flies a Piper Super Cub, named Kathy. His job is to keep an eye on things from above and coordinate with the grounds team; keeping an eye on the elephants and helping with the game count (among other things).

The smallest plane I had been on up until then was a 210. I was a little nervous, but more excited, I think, about flying with my little brother for the first time.

I am a little nervous with small planes; more for the factor of getting air sick than anything else, but I really did want to go flying, so I hoped that I could hold it together. I didn’t have a proper headset on, and sitting behind my brother meant he was just pointing out where to look and hopefully with some brother-sister intuition I would figure out what it was I should be looking at!

The experience was amazing. I am super proud of my brother for doing what he does. He’s so talented and such a good pilot. He works his butt off. And hard work pays off. He’s busy from 6am-6pm and if he’s not flying, he is using his conservation skills and making a difference.

I went up with him on a routine patrol and it was incredible. I was way too chicken to have the door open, the window was enough, and I tried to shoot some aerial photographs as much as possible. It was a little bumpy, I can’t deny that, and that feeling of nausea was creeping its way up, but the fresh air made a big difference. I tried to refrain from looking down though! Eek! 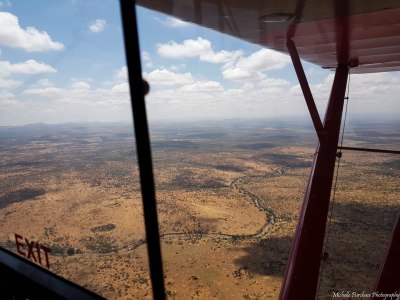 The view was spectacular. I didn’t expect it to look like it did. Such a different terrain in different areas and although I said it was dry, from above it looked much better. It looked… nurtured. It looked magical.

I would definitely go up with my brother again.